How Long is the Flu Contagious, Really?

This is a simple question but one that can get surprisingly controversial! Everyone seems to have a different opinion of how long can a person infected with Flu still be contagious, especially the guy who comes back to the office still sniffing and snorting, making other employees fear to contract the flu too. Today, we will answer this question once and for all. The answer might also surprise you!

So, how long is the flu contagious? I don't want to spread it to others!

No one wants to be that person who goes back work still a little under the weather, and then watch the whole office go down with sniffles. So, how long do you need to avoid others before you can be confident you're over the flu?

Unfortunately, the answer is a little unsettled because not everything we call "the flu" actually is a real flu. We classify a whole lot of other viruses and bacteria as "flu" due to similar symptoms. Influenza is contagious right from the day before its symptoms manifest [oops!], up to a week after that. Young ones will still be contagious for a little longer than that. If you contract complications like pneumonia, or if you struggle to get over the virus, you also may remain contagious for a little longer, typically not longer than 2 weeks. You will definitely be contagious if you still have a fever. For this reason, it is advisable you stay for at least a day after getting over the fever, to conclude that the flu is no longer contagious.

You've probably noticed the catch 22 there - it starts being contagious a day before you know you have it. This is one reason why flu spreads so rapidly among people, especially in such places as schools and offices. You start passing it on before you even know you have it. In fact, most infections occur when those who do know they're sick come to work anyway, or send sick children into social settings like schools.

So, now we know how long the flu can remain contagious, the "real" flu at least. We also know that most of what we call "the flu" might actually be just a head cold, and they're actually more typically rhinoviruses than influenza. All the same, the incubation periods are almost the same - one day before symptoms to a week after that. You’ll typically get over a head cold a lot quicker than the "real" flu. It's also rare for a cold to head into the lower respiratory tract, whereas flu will often manifest itself in both the lower and the upper respiratory systems.

So how do these diseases spread?

Colds and flu are most often spread by airborne aerosols from sneezing and coughing. Gross as it may seem, most infections occur from "spray" released by the sick from their nose and mouth. The sensitive mucous membranes of the nose, eyes and throat are particularly prone to invasion by these pathogens. Touch can also help spread the viruses; if you touch a surface that’s still infected with the flu-containing water droplets, you’re more likely to contract the flu. For example, a colleague may cover their nose with their hands when sneezing and then proceed to open a door.You will be exposed to the viruses when you take hold of the same doorknob soon after. These viruses can typically live for up to 48 hours outside of the human body. 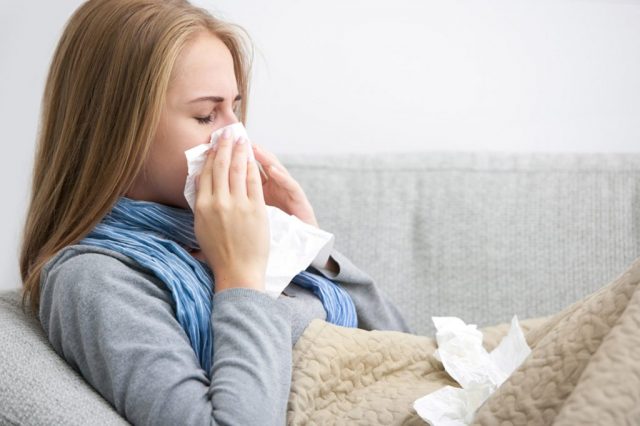 How can I help prevent the spread of the flu?

Now that we know for how long the flu can be contagious, it's pretty obvious how outbreaks occur. Even though you can’t guard against the spread of the virus before you know you are infected, you can still do a lot to help other people around you. Taking time to rest and recuperate is not only important for you, but also ensures you don't expose your coworkers or other people to the flu virus. Remember that "medications" for colds and flu will suppress symptoms and make you feel better but they will not prevent you from spreading the virus. This means that you are still very likely to infect others. Staying away from human interaction as much as possible is the only way you can help stop the spread of the flu. Your coworkers will thank you for that consideration!

How can I avoid getting the flu?

You might not be able to avoid exposure to flu totally but there's a lot you can do to safeguard yourself. Obviously, avoiding interactions with sick people is the best way to avoid contracting the virus. If you have kids or family members who are sick and need to be cared for, wearing a medical mask may cut down your chances of infection. It's also important to practice impeccable hygiene during the flu season including washing your hands regularly. You can also use disinfectant wipes on common germ-harbouring surfaces like toilet handles, doorknobs and telephones. An ounce of prevention is way better than a ton of cure after you contract the flu!

I'm sick! Should I stay home?

The answer is yes but we know life isn't always that cooperative. However, if you have influenza, taking enough time to rest and recuperate is critical. You will likely run a higher fever than with normal colds, and symptoms will also be severe. With a head cold, you may only need to take a few days to recover fully but for the flu, do try to at least take some time for yourself. This will not only speed up your recovery, but also help prevent the spread of the disease. Wearing a medical mask may not be a fashionable thing to do but you'll have to wear it if you have to deal with people. You’ll look odd for sure but they'll thank you for not spreading the germs to them. Warn others to stay back a little, and also try not to cough into your hands - instead, opt for the crook of your elbow, where others won't come into contact with such germs.

Now that you know how long the flu is contagious, you'll better be able to manage how you interact with others when either of you is sick.